The photobioreactor design with glass tubes is the only established closed technology for economic microalgae production worldwide. Headed by Prof. Dr. Dr. h.c. Otto Pulz, this photobioreactor was brought to market by IGV Biotech at the end of the 1990ies. Until 2014 Prof. Pulz managed to install more than 200 photobioreactors worldwide with the support of bbi’s technology solutions. He contributed a lot to the global research on microalgae.

Starting March, 1st 2015, bbi-biotech integrates IGV’s photobioreactors into its own life science product portfolio, since IGV management has announced to quit this sector in 2014.

IGV permanently continued its photobioreactor development. This resulted very early in a partnership with Bernd-Ulrich Wilhelm, CEO of bbi-biotech GmbH, which is supplier of bioreactors and fermenters of the xCUBIO series for biotech research and production companies worldwide. He contributed automation systems for more than 100 photobioreactors during this partnership, while IGV concentrates on microalgae processing and application until today. Prof. Pulz could rely on B.-U. Wilhelm and his staff particularly in the case of high-end pharmaceutical solutions and in complex scaling issues. bbi e.g. contributed essential technology solutions for the steam-sterilizable MEDUSA and automated the novel HORIZON or MUTL photobioreactor. The scaled rain drop HORIZON photobioreactors have been equipped with full scale process control systems, based on the xCUBIO toolbox.

Mr. Wilhelm and his bbi-biotech GmbH targeted to safe the prosperities of Prof. Pulz, after IGV announced to stop the photobioreactor construction: “The experience from construction and operation of more than 200 algae bioreactors and an extensive collection of innovative know-how of the upstream in blue biotechnology would have been lost.”

Now IGV has signed an agreement after some structural and personal changes and gives bbi access to the collected know-how of photobioreactor construction and operation. “We are now able to continue the glass tube photobioreactor portfolio from lab scale up to industrial outdoor installation.” says B.-U. Wilhelm. Latest technological developments from biotechnology and life sciences would be implemented into the existing concepts, which would result in an upgraded photobioreactor series without extra cost.

On the past DLG International Algae Congress, which was hold in December 2014 in Florence, Italy, Thomas Wencker presented bbi-biotech and the current version of the xCUBIO phar. During his lecture and the trade show he gave information on the upcoming decisions between IGV and bbi to the public audience for the first time. Bernd-Ulrich Wilhelm: “The positive resonance to Mr. Wencker’s appearance on the IAC 2014 has shown that the current agreement was the correct step. I look forward to provide novel high-end and efficient photobioreactor solutions to our innovative algae biotechnology customers. “.

Efficiency and Quality in Photobioreactor Engineering

The idea of building photobioreactors for microalgae production with glass tubes has already been born at IGV Biotech in Potsdam-Rehbrücke in Germany at the end of the 1980ies. Prof. Pulz headed the development of several pioneer photobioreactor constructions, e.g. flat panel plastic plate systems, thin layer installations or even fibre-illuminated concepts. First glass tube systems have been put to artificial light and to the outdoor sunlight in the meantime and were intensively examined in different scales. Pilot scale outdoor photobioreactor trials have been successfully done with the flue gas of lime kilns or at coal and gas power stations. The world’s first scaled glass tube photobioreactor installations for industrial microalgae production have been implemented with Prof. Pulz’ photobioreactors after the year 2000.

After all, the glass tube principle has finally succeeded in photobioreactor construction. The material demonstrates its durability and its high quality grade within many algae production installations. In fact, glass has recently even become cheaper than comparable plastic materials. Glass is easier to clean because of its straight surfaces and it allows the construction with minimized dead spaces for quasi-sterile operation. The demand for pumping energy could be minimized and is now on a level with open or bubbled production systems. The product is microalgae biomass on a quality level, which even convinces sophisticated application concepts from pharmaceutical or cosmetic sector. Photobioreactors with glass tubes allow stable and high outputs when scaled to industrial size.

bbi-biotech GmbH develops, produces and provides its xCUBIO bioreactor and fermenter series for all biotech applications. Specific automation tasks in GMP-environment are implemented like the cost-saving retrofitting of existing biosystems and their cultivation vessels. bbi-biotech additionally provides the unique sterile automated sampling system bioPROBE, which is patented worldwide and which allows the formerly inhibited opportunity of integrating external analyses to the process automation – Atline and without staff demand. General biotech consulting, calibration and training services round the life science portfolio of bbi-biotech GmbH out.

GV GmbH develops innovative products, facilities and processes for grain processing and biotechnology as well as foods and related products. Being founded in the year 1960, contract research for industrial and public customers were core issues below the motto “Partner for a healthy future”. The service range includes scientific-technical services for product and process development, laboratory services, consulting as well as training and continuing education.

The IGV Foodtech department focusses on product and process innovations with practical relevance. Together with the laboratory services of the IGV Testlab department, the greatest product safety for our customers can be ensured the while taking current environmental concerns into account. Our quality standards are state-of-the-art. The IGV campus complements the theme oriented company departments with a sophisticated training, continuing and higher education offers for the entire foods industry. 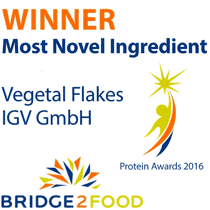